(This is a repost of an article originally wrote for Progress, Not Perfection)

When I was a college freshman in southern California, I got a job selling overpriced memorabilia at a local mall. I felt like I’d entered a different world – my manager was African American and the assistant manager was gay. I’d grown up in a small, northwest community that was as monochromatic as a slice of Wonder Bread. The two or three African Americans who lived my in town were almost treated like royalty as everyone tripped over themselves to demonstrate they weren’t racist. (How they treated the migrant Mexican workers was another matter.)

I thoroughly enjoyed working for Marsha, not just because it proved I wasn’t racist, but because it was cultural experience. I learned that “ax” meant “ask” and that is was ok to say “Praise Jesus” at just about every occasion. But nothing shocked me as much as when she talked sadly about a friend’s son who had just joined the Los Angeles Police Department. “He seemed like a good Christian, too” Marsha said, speaking of him as a prodigal son.

I was speechless. I had grown up believing “the police are our friends” and that they do not “bear the sword for nothing” (Romans 13:4). At the same time, she was an African American woman from Los Angeles in the era of the Rodney King beating, so I just held my tongue. But I simply couldn’t understand how another law-abiding believer could have such a low view of the police.

My family and I are on a year-long trip around the country and this week we entered the South. Once again, I feel like I’ve entered a different world. The hotel clerk couldn’t believe my daughters had never tasted grits and I’ve occasionally struggled to understand what the locals are saying. But by entering this world, I finally understand Marsha’s world a little better. 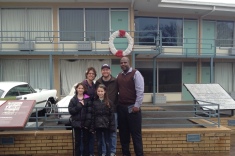 We recently visited the Civil Rights Museum in Memphis. It’s a remarkable museum in many ways, not the least of which being its location. It was built in the Lorraine Motel, where Dr. Martin Luther King, Jr. was assassinated. The iconic balcony looks just as it did 50 years ago, except for the wreath marking the spot where he was shot.

The museum begins with an exhibit about the early days of slavery followed by a movie that took us up to the end of the Civil War. From there, exhibit after exhibit led us through the creation of Jim Crow laws, the oppression of African Americans, and the struggle for civil rights. I kept thinking, “How could people – Christians – do this to their fellow man?” And then it was in the Selma exhibit that I finally understood Marsha’s world. As I watched the video of state troopers beating peaceful citizens marching across a bridge, I got a taste of her anger and distrust. What is one to do when those sworn to uphold justice are the very ones denying it? How can that trust be rebuilt when injustice still happens today?

So what is my point in sharing all this? Last year, I met an African American young man who was traveling around the country, much like my family is now. He told me that he traveled with a Chihuahua, not just for companionship but to serve as an “ambassador of cuteness” that eased white people’s fear of him. Later, I talked to my daughters about how sad it was that he couldn’t travel without the fear of racism. One of them responded, “But daddy, I thought Martin Luther King fixed all that.” 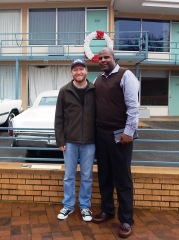 As one who has largely been sheltered from the ugly face of racism, I see in myself in my daughters’ naiveté. Until I was able to enter Marsha’s world just a little, I did not understand how much we still live under the shadow of centuries of injustice. The suspicion and distrust between the African American community and the police still exists. As one example, we visited the Civil Rights Museum with an African American gentleman I met in Houston. He explained to us that, even though he is respectably-dressed business man, there is a stretch of road between Texas and Louisiana where he is consistently pulled over for the smallest of reasons.

So I guess this is my point: Regardless how you feel about Ferguson or “I can’t breathe” the one word you cannot use is “simply.” Nothing about race relations in America is simple. It cannot be adequately addressed in sound bites or tweets. Ferguson is not simply about whether or not Michael Brown had his hands up. Civil rights are not simply about marches in the 60’s. Quotas and equal opportunity are not simply “reverse racism.” It is all very complicated and I think I’ll be more cautious in airing my opinion on Facebook until I understand their world a little better. Before I speak, I need to step out of my white, middle-class comfort zone, past the myth that racial issues are long gone, and into their world that is still plagued with inequality. For me, this required taking a trip around the country. I hope you can find a shorter route.