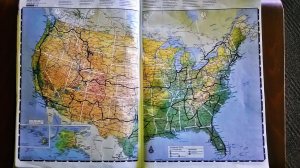 As most of you know, my family and I just returned from our eight-month, 40-state (and 2 province) road trip. Over the next several months, I’m going to post various stories about our adventure, from watching cowboys joust to meeting the pastor of “The Most Bombed Church in America.”

But first, I want to tell you a little more about the trip and how it began with a divine deception.

When we started our planning, I thought it would primarily be a book tour for my recently released book, Radically Normal. Sure, I knew we’d get to see some amazing sights and get a break from the brutal ministry experiences we’d been through, but that was secondary to the business aspect.

And this is where God tricked me. Early in the planning of the trip, the pastor of a church in Oregon invited me to speak at his church. The timing was perfect – he wanted me for the very first Sunday of our trip. Coincidence? I thought not. I was sure that meant I’d have speaking engagements almost every Sunday thereafter.

Not so. It’d be another four months before I spoke at another church. (For the record, my wife had far more realistic expectations.)

I spent the next several month frustrated by the lack of speaking engagements. Try as I might, I was only able to get a handful of small events. I wasn’t just frustrated, I was confused. What had I missed? What was God doing?

About halfway through the trip, relaxing in a hot tub somewhere in central Florida, I thought, “You know, this is really is a nice break from all that we went through over the last four years of ministry.”

Then it dawned on me, this trip wasn’t just about business, it was a much needed sabbatical. After all the pain we’d been through, we needed this trip to be refreshed and recharged. I needed to regain a heart for ministry.

Later that night, I wrote in my journal: “I don’t know why it took me so long to see that this trip was also a sabbatical. Yes I do know why; I was too busy being anxious. Isn’t that just like us – to be so busy striving that we can’t see the gift God is giving us?”

In my anxiousness to launch Radically Normal, I wasn’t willing to take the break I really needed. I thought I had too much to do, so God had to trick me into taking a break.

Sometimes God has to trick us because our plans are not his plans.

That is not to say that his plans always involve a hot tub, but they are always best. They always bring the greatest long-term joy and peace.

And so, even as my family has come back home and is living in the midst of even more uncertainty – Where are we going to live? Should I go back to pastoring? – I think I’m in a much better place to relax and enjoy the ride.

Has it really been a month since my last post? My goal is bi-weekly, but life happens, doesn’t it?

In this case, life has included being a pastor, making a lot of lattes, enjoying being husband and father more than I ever have, AND working on Radically Normal (I have dropped “The” and “Christian” from the title, made it too long). I am just about done preaching through the main ideas of the book , which has forced me to keep the material more practical than theoretical.

You can read or listen to the sermons on my church’s website: www.tgcconline.com.

Along with that, I have been working on a book proposal and learning about the industry. Turns out, publishers and agents don’t really want to be sent completed manuscripts, they want a proposal, which provides them with the gist of the book as well as some sample chapters.

So here is the current plan: I am taking two weeks of vacation (from the church, not Starbucks) at the end of the year to complete the book proposal, then I will start looking for an agent. At the same time, I will also work on building my “platform,” getting my name out there in the internet world.

If you have any connections or suggestions in this process, I am all ears!